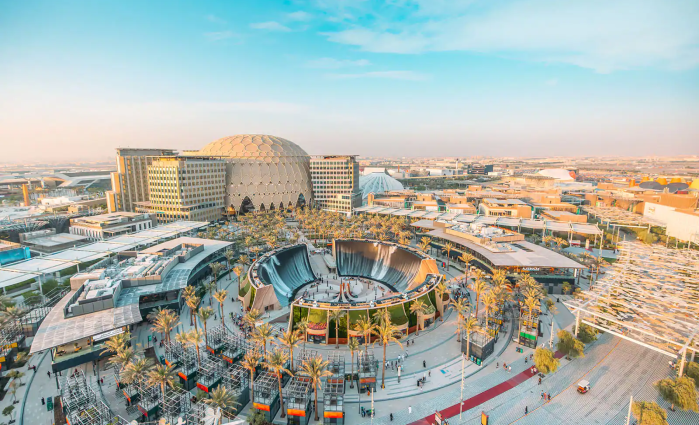 Siemens will be among the first to move into Dubai District 2020 when it opens later this year. Hundreds of their work staff will be based in a building near Al Wasl Dome.

This company is committed to bringing its cutting-edge technology to the new community, including its “smart city” application that aims to lower high energy costs for residents.

District 2020 in Dubai South is scheduled to open in October with the 4.38 square kilometer area repurposed to house 145,000 residents. Its aim is to become the first 15-minute city in the United Arab Emirates, which means that anything a resident needs can be reached within a quarter of an hour on foot or by bicycle.

Helmut von Struve, CEO of Siemens Middle East, has announced for the first time what his company’s existence means to residents and how its technology, successfully applied at Expo 2020 Dubai which covers an area twice the size of Monaco, could change their lives. “This is a bright opportunity for the future, where people can work and live in an innovation-focused ecosystem that will accelerate future technologies to reinvent the future of smart and sustainable urban spaces, fully digitized and with 5G coverage.” Von Struve told the Emirates Herald newspaper.

Siemens will start with some 250 engineers, researchers and logistics experts who will move into a building during Expo 2020, near the Al Wasl dome.

After the world’s fair ended in March, about 80% of the buildings and infrastructure remain, along with the software and sensors installed in them. More than 15,000 Siemens-operated cameras across the site transmit data to administrators, and an access control system connects around 5,500 doors. MindSphere, an operating system, monitors temperature, monitors heating, air conditioning, fire alarm systems, ventilation, and electricity usage. Residents can then access this data through the “smart city” app.

Von Struve explained, “We measure air quality. When we get information from the temperature readings, according to the number of people in a building, we can adjust the air conditioning, in this way it allows us to save energy because it is not necessary to operate the air conditioning where there are no people”

In addition, he spoke of great savings in the use of water. “If you have leaking irrigation systems, normally these leaks are not detected immediately, with this system, you can get closer to the area of ​​the leaks and the operators can turn off a certain valve to minimize them.” “Energy efficiency is for each one of tenants, whether it is a commercial tenant or from the residential unit because the overall goal of District 2020 development is a human-centered city.”

Incredible facilities and architectural structures, two large parks, walking and biking trails are some of the hallmarks of District 2020.