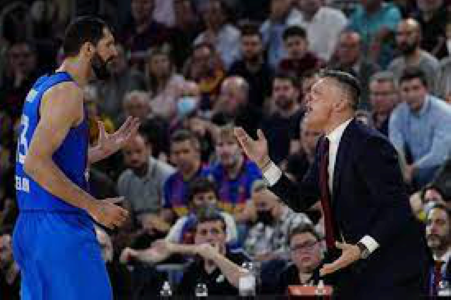 For the second consecutive season in the two years that the Lithuanian Sarunas Jasikevicius has been on the bench at the Palau Blaugrana, Barça finished first in the regular phase of the Euroleague (24-10 in the first, 21-7 in the second) and needed to reach until the fifth game to overcome the eighth placed in the quarterfinals.

“In general, we have not done a good series, but we are in the ‘Final Four’. When we get to Belgrade, everyone will start from scratch and it is the only balance we can have. But we have to think, because we can play better, “said the Lithuanian coach on Tuesday after achieving the pass.

As happened the previous year in the series against Zenit Saint Petersburg, the Palau Blaugrana was a differentiating factor in the fifth game against Bayern Munich, according to Jasikevicius: “We are not Serbs or Greeks, but the Palau on big nights is a huge factor.

Despite managing a less talented squad than the Barcelona player, Italian coach Andrea Trinchieri pushed the Barça team to the limit, with a suffocating defense in the low post and the aggressiveness that defines the tough Bayern during the 40 minutes.

Trinchieri saturated the Barça inside game in the second game and penalized the 16 losses of the Catalan team -26 points in transition- to tie the series (77-67), driven by the offensive inspiration of Deshaun Thomas (25 points).

In the third game, the first in Munich, Barça started like a shot, propelled by four triples, but needed the best Mirotic (11 of his 25 points in the last quarter and 31 PIR credits) to secure the win (66- 75).

In the fourth game, the Catalan team suffered an offensive and mental collapse (5 of 26 in triples and 9 of 23 in shots from two) against Bayern, who managed to win by 19 points after the break despite the misleading 59-52 final.

Doubts surfaced in the final match (31-37, half-time), but Laprovittola’s scoring explosion (26 points, 20 in the second half), supported by Mirotic (20 points), restored confidence to Barça, who recovered their best defensive version to confirm access to the Final Four (81-72).

«In the second part we have not given anything away. We got a lot from outside in the third quarter. We knew they were going to collapse the paint, we went out with three shooters and it helped us a lot that Calathes also put in. We have punished as we could not do throughout the series, “Jasikevicius summed up.

In the first four games of the series, Barça averaged 69.8 points per game and 29.2% of the three-point shooting, far from the 81.3 goals and 41.3% from beyond the arc that he recorded in the regular phase.To access the Euroleague final, they must beat Pablo Laso’s Real Madrid, a rival they have defeated in 11 of the 14 duels played since Jasikevicius’s arrival at the Palau Blaugrana bench (5 of 6 this season), if Well in the last two precedents, settled with Barça victories (59-64 in the Copa del Rey final and 108-97 in the Endesa League after extra time) equality reigned.

It will be the sixteenth Final Four in the history of the club, which has only lifted the title twice (2002-03 and 2009-10). Before the arrival of Jasikevicius, Barça went seven years without participating in a final phase of the highest European competition.

The Lithuanian coach has changed this trend and is confident that it will be consolidated in the coming years: «We want our project to be similar to that of CSKA Moscow, which I think has only lost one Final Four in the last 20 years. That should be our goal.”

2022-05-04
Previous Post: Mysterious cases of hepatitis reported in minors
Next Post: In Dubai Virtual Assets Regulatory Authority plans to establish its main headquarters in the metaverse