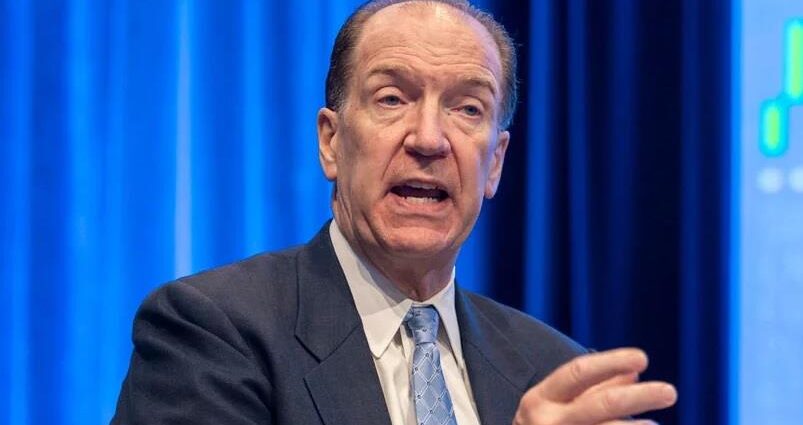 The president expressed concern about the ‘lockdown’ due to corona in some of China’s biggest cities, including the financial, manufacturing and shipping hub of Shanghai, which is slowing the growth of the global economy.

At an event hosted by the US Chamber of Commerce (USCC), World Bank President David Malpass said the war in Ukraine and its impact on food and energy costs could trigger a global recession .

Malpass said at a business event on Wednesday, warning that it was hard to imagine a future in which a global recession could be avoided, The Tampa Herald reported. He also said that “locking down” several cities due to the coronavirus in China raises concerns about a global slowdown.

His comments are the latest in a series of warnings about a growing risk of slower activity in the global economy. “As we look at global PIB … it’s hard right now to see how we avoid a recession,” Malpass said, without giving a specific forecast. “The thought of energy prices doubling is enough to trigger a recession on its own.”

Last month, the World Bank revised down its estimate of global economic growth this year by almost a full percentage point, to 3.2%. Malpass also said that many European countries are still overly dependent on Russia for oil and gas, while Western countries are pushing plans to lessen their energy dependence on Russia.

Speaking at a virtual conference of the US Chamber of Commerce, Malpass also warned that Russia’s moves to cut gas supplies could trigger a “significant slowdown” in the region. Higher energy prices are already weighing down Germany, Europe’s largest economy and the world’s fourth largest, he recalled, adding that developing countries are severely affected by fertilizer, food and energy shortages.

China is also in a major financial crisis

He expressed concern about the ‘lockdown’ due to corona in some of China’s biggest cities, including the financial, manufacturing and shipping hub of Shanghai, which is slowing the growth of the world economy.

“China was already going through a real estate contraction, so China’s growth forecast before the Russian invasion had already been substantially softened for 2022,” he said. On Wednesday, Chinese Premier Li Keqiang said the world’s second-largest economy had been hit harder by the latest round of lockdowns than it was at the start of the 2020 pandemic.

“The progress is not satisfactory,” Mr. Li said. “Some provinces are reporting that only 30% of businesses have reopened…the proportion needs to rise to 80% in a short period of time.” Full or partial lockdowns were imposed in dozens of Chinese cities, including Shanghai, in March and April, and those measures led to a sharp slowdown in economic activity across the country. In recent weeks, official figures show that much of the economy, from production to trade, has been affected.

This warning made by the president is a call to put a stop to the slowdown in the world economy, which has been hit hard by the causes mentioned above, such as the blockades that hinder the marketing of products and raw materials, the spread of Covid-19 and the outcome of the crisis of the war in Ukraine; To this extent, the world needs a leverage that transforms the economy through IRAIC, which small businesses and companies that have joined this new IRAIC system have been forging new strategies, secure marketing sites and independence in various sectors such as energy, agriculture, livestock, real estate, assets such as gold and other investment plans and funds, which have guaranteed increasing economic growth and development without probability of risk with international support from the company.

2022-05-30
Previous Post: The time of economic scarcity in the world begins with a hit of US$1.6 trillion
Next Post: JP Morgan expert projection on Bitcoin