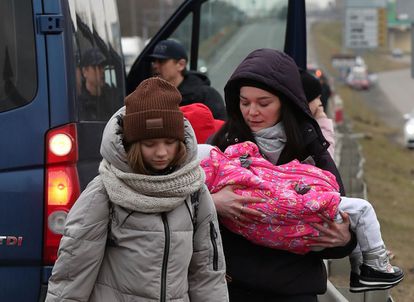 The invasion in Ukraine has already led to more than a million civilians fleeing their country, the United Nations Office for Refugees (UNHCR) reported Thursday.

Ukrainians, and many foreigners who were in the country, are crossing into neighboring nations such as Poland, Romania, Slovakia, Hungary and Moldova.

Smaller groups have gone to Russia and Belarus.

One million people have fled Ukraine in just seven days, uprooted by this senseless war. “I have been working in refugee emergencies for almost 40 years and I have rarely seen an exodus as fast as this,” said UNHCR High Commissioner Filippo Grandi.

“Hour by hour, minute by minute, more people have to flee from the terrifying reality of violence. There are innumerable displaced people within the country,” he added.

Poland has been the country that has received the majority of those who flee, with more than 500,000 people until this Thursday, the day that marks a week after the Russian invasion of Ukraine.

The European Union (EU) reported that some four million people could try to leave Ukraine and that it will receive the refugees with “open arms”. The country has 44 million inhabitants.

The EU and the United States announced this Thursday special protection measures for Ukrainians fleeing the war.

¿How are they leaving their country?

They have done it through land vehicles and others have even had to walk, as it has become impossible to board the trains leaving Ukrainian cities.

Commercial flights have been impossible to board as they were canceled a few hours after the start of the Russian invasion.

Refugees are told they don’t need documents, but many are receiving refugee status with their passports or birth certificates.

But they must prove in some way that they are Ukrainian citizens or people living legally in Ukraine, such as foreign students.

That is why some minority communities, including workers from Africa, have faced problems. Some have denounced that they suffer from segregation.

¿What support are they receiving?

In Poland and other countries bordering Ukraine, refugees can stay in reception centers if they don’t have friends or relatives to stay with. There they are provided with food and medical care.

Hungary and Romania are offering cash subsidies for food and clothing. Children are given places in local schools.

The Czech Republic will allow refugees to apply for a special type of visa to stay for some time.

Greece and Germany have sent tents, blankets and masks to Slovakia, while France has sent medicine and other medical equipment to Poland.

¿How many Ukrainians are internally displaced?

UN estimates say that at least 160,000 people in Ukraine have fled violence and are displaced within their own country.

The EU believes that figure could reach seven million and that 18 million Ukrainians will be affected by the war.

The UN High Commissioner for Refugees says it is trying to help displaced people inside the country, but the war has created unsafe ground for them.

The UN is preparing to provide assistance in western Ukraine, where access is easier.

Special protection in the US and the EU.

Ukrainians already in the United States will be covered by special protection. Those who were already in the US last Tuesday will be able to stay in the country under a new special category for non-migrants.

The US Department of Homeland Security normally designates nationalities under TPS for armed conflicts, natural disasters, epidemics and other extraordinary and temporary conditions that prevent people from returning to their countries of origin safely.

As for the European Union, the bloc agreed to grant temporary residency of up to 3 years to Ukrainians fleeing the war.

EU ministers gave the green light to the plan at a meeting in Brussels on Thursday.

To do so, they will launch a mechanism never used before that gives Ukrainians and their families the right to work, education and social security.