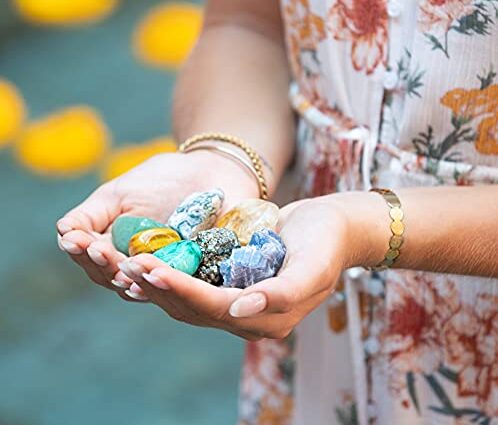 The truth about beauty products and treatments with gemstones and crystals

The therapeutic use of stones is an ancient practice. Ancient civilizations have used it to heal physical and energetic wounds, improve mood, calm the mind. The Egyptians, the Aztecs, the Mayans, the Persians, used them, but today’s beauty laboratories also. Throughout the year of 2021, they have been on the rise because their presence in formulations is considered to provide several benefits for skin health, combat aging, improve its texture and luminosity.

Sharon Sharon Hilditch, developer of a cosmetic line with crystals in the United Kingdom, was consulted by the specialized portal Healthline, where she explains that gemstones and crystals work under the principles of energy medicine, which is defined as “any interaction energetic or informative with a biological system to restore homeostasis to the organism”, according to a scientific article contained in the National Library of Medicine of the United States. Hilditch believes that “everything contains vibrational energy, from our own bodies to stationary objects, which constantly fluctuate at varying frequencies.” In this way, the powerful energy of stones and crystals influences both our physique and our energy field, and it is this action that works on symptoms such as redness, inflammation, breakouts and expression lines.

María Fernanda Yegres Guarache Hardeep Kaur, channeler and instructor of Kundalini Yoga, agrees with her. She explains that the effect of precious stones and crystals stems mainly from the energy point. “Each stone and each crystal has a different physical composition and color that give it a certain vibration. Likewise, we have seven main energy centers with particular vibrations and, by resonance, these stones and crystals work by favoring energy centers of our physical body and on our aura, which would be our total energy field”.

The expert assures that beauty beyond something that we can visibly appreciate, it is also an energetic issue, which is an expression of the internal harmony that we can radiate, so that it is also influenced by elements such as stones and crystals.

“It is the aura of a person that transmits their internal harmony and that translates into beauty, into magnetism.

It is an invisible field that has a very important impact on the way we perceive the person in the expression of their internal harmony”.

Additionally, the mentor highlights that stones also have attributes that influence the physical. “It is something that is more difficult for man to believe because it is less documented, but they do work. We have seen consistent physical changes in the health of many people treated with stones.”

There is little scientific evidence about the use of these materials in alternative medicine, however, a conference was presented at Goldsmiths University, which exposes that the true power of crystals lies in the placebo effect.

This study consisted of asking 80 people about their level of belief in paranormal phenomena, and then asking them to meditate for a few minutes while holding a quartz.What the participants did not know was that some of those quartz were fake. At the end of the meditation, they were asked about the sensations experienced and those people more in tune with paranormal phenomena described a greater number and intensity of sensations -regardless of the type of quartz or glass they held- than those who said they did not believe in paranormal phenomena.

“We found that many people said that they could feel strange sensations while holding the crystals, such as tingling, heat and vibrations, if we told them beforehand that this is what could happen,” Christopher French, a psychologist and one of the researchers, told Time magazine. authors of the experiment. “In other words, the reported effects were the result of the power of suggestion, not the power of the crystals.”

On the other hand, there is the mechanical effect that crystals can have. In fact, microdermabrasion uses small crystals to rejuvenate the skin through a peel. The effect of this procedure was analyzed in a study published this year and it was found that indeed, after removing the stratum corneum of the skin, it regenerates with improved aesthetics.

Likewise, Elle Macleman, a biochemist of skin care, consulted by Healthline, asserts that “there is no evidence to suggest that any gemstone has any benefit for the skin or hair, apart from the power of suggestion and placebo. There is no evidence to suggest that they have energetic properties,” he says, adding that he does, however, believe that there is great power in faith. “If someone thinks a product will help boost their energy, they probably will, especially if it already contains so many other helpful skin-enhancing ingredients.”

The power of faith

If you are in the group of people who believe that the energy of these beautiful materials can really positively influence our body, you should know that experts say that each stone has its specific use, both emotionally and physically.

In fact, María Fernanda shares that rose quartz, for example, which is known for its influence on personal relationships, is also used by therapists to calm and prevent physical problems, among which we find the activation of circulation and heals the skin. . In addition, according to the specialist, it brings relaxation and tranquility to the body, mind and soul.

Amethyst is also used to treat skin problems, as well as jade, so used in facial rollers, it is recognized for its healing properties in ancient oriental medicine. This beautiful green stone favors the purification of the body.

As the specialist explains, there is no magic formula for using these stones, since they are emanating their energy all the time.

What is definitely true is that, although there is no scientific evidence, what these therapies do achieve is to tune us into an atmosphere of relaxation, and this positively influences stress management, which affects our health causing sleep problems, fatigue , headaches, among other symptoms that are reflected in our appearance.