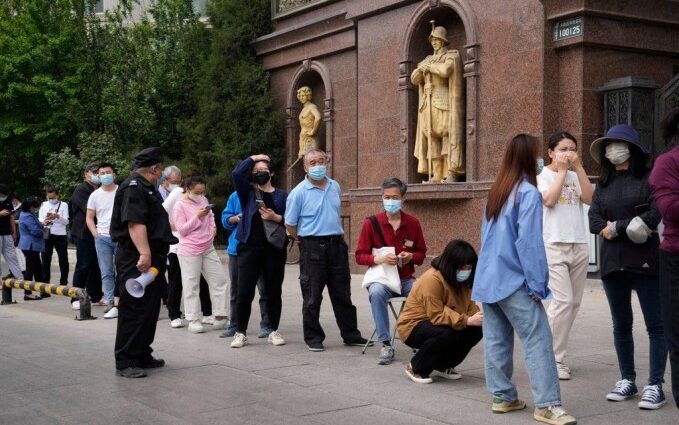 Authorities in China’s capital city Beijing have begun mass testing affecting at least half the population, a possible signal to speed up its pace of “zero-COVID” containment and lockdown like Shanghai. Locals are scrambling to stockpile food and supplies for fear of starvation during the impending lockdown.

The epidemic situation in Beijing is “serious and complex,” and is “at a peak,” the municipal epidemic prevention and control office said on April 25, announcing that in just three days, from April 22 to 25 April, the COVID-19 virus spread from Shunyi and Chaoyang counties to Fangshan, Changping, Fengtai, Xicheng, Yanqing and Tongzhou counties, covering half of Beijing.

Chaoyang District has set up more than 1,300 nucleic acid test points to take samples from all people, while each household is sealed and monitored. The sites will conduct the tests on April 27 and 29. Restaurants, entertainment venues, and indoor gyms in the district are closed, and schools have moved to online learning, The Usa Herald reported on April 25.

Beijing, a megalopolis of 21 million people, is likely to be the next target of “zero COVID” restrictions. Shanghai, China’s economic hub, is in its fourth week of lockdown, with many residents begging online for food and medical care.

Fearing a similar situation, Beijingers have rushed to stock up on food and basic supplies.

“Now, when people find out there are confirmed cases, the first thing they do is go to the supermarket and stock up on food.” “It’s really disgusting that everyone in Chaoyang District has to get up at 5 in the morning to take a nucleic acid test, and that we keep putting up with it… I’m not sure how much longer we can take it,” he told The Usa Herald. Liu Bo, who lives in Chaoyang District.

Gao Shan, an independent academic, told The Usa Herald that Beijing is now in a state of panic, and the first words people say to each other are: ‘Have you made food reservations?’” The panic of the population in the face of food shortages must be blamed on the propaganda of the authorities: “The mutant strain of omicron is not so terrible, while the government propaganda that emphasizes the dynamics of restricting the sale of food is frightening to the people”.

“A lockdown will bring horrible consequences after the lockdown that many people do not have the supply of goods like enough food to live, or to go to the doctor when they are sick,” Gao added.

“The government is doing this zero COVID restriction in all provinces and cities, but how can it be lowered to zero? In some areas, farmers are not allowed to plant their land, so what are we going to eat if they don’t farm?” Gao asked.

Relative to other countries that have opened up, China’s adherence to its tough anti-COVID policy would drag down the country’s economy, “this is self-destructive for the Chinese Communist Party,” Gao said.

Beijing’s stepped-up anti-virus measures came on April 22, when the city announced a new positive case in a couple working in Beiwu town in Shunyi district. The town was later closed to test everyone overnight.

On the same day, more new cases were detected in Chaoyang District, including a student from the Chuiyangliu Branch of Huiwen High School, who was quickly quarantined. The school notified suspension of classes for 7 days, isolation at home and not leaving until further notice.