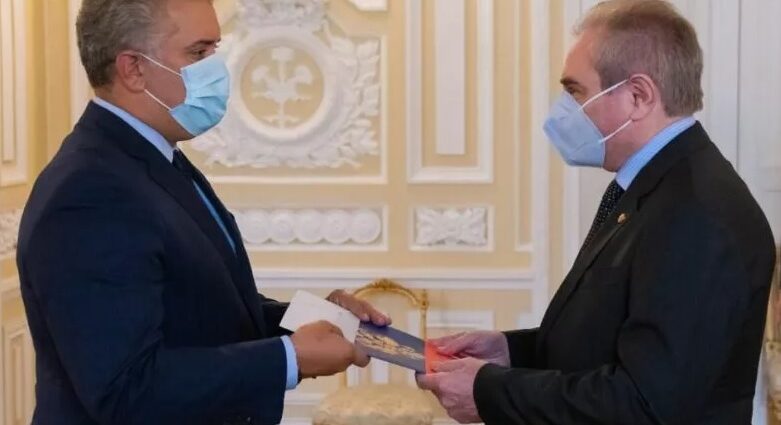 Only last week, the government of Iván Duque described the Russian invasion of Ukraine as a “genocide”, hardening the language with which it has been referring to the situation in Eastern Europe.

The Russian response accused the Colombian government of trying to “generate and/or artificially sharpen tension in relations in order to harm them,” according to the head of the Russian delegation in Bogotá, Nikolay Tavdumadze, in a statement.

Before aligning himself with the United States and Canada in the use of the term “genocide”, Duque had been the object of strong criticism from Russia, which before the UNU Security Council questioned his fragile implementation of the peace agreement with the guerrillas of the FARC and the rise in violence.

“In Russia we usually tell friends the truth,” added Tavdumadze, evoking his country’s reprimand to Colombia during the Council meeting on April 12 in New York.

On that occasion, the Colombian president responded by asking “those who are lacerating a winter town” not to teach peace lessons.

kyiv has accused Moscow of committing war crimes and planning the genocide of its population even before the discovery of hundreds of civilians killed and buried in mass graves in the city of Bucha.

While Western countries had avoided using the word “genocide”, in line with a long-standing protocol involving a strict legal definition and a crime that is difficult to prove, the United States, Canada and the United Kingdom have relented.

In May 2021, in the midst of an unprecedented protest movement against the government, Colombia blamed Russia for being linked to cyberattacks against official pages. He has also questioned Russian support for troops from Venezuela, a country that Colombia has accused of harboring armed groups operating in the border area, although Caracas denies it.

This is the statement of the remarks of the Russian Ambassador in Colombia Nikolay Tavdumadze:

The premeditated line of artificially generating and/or sharpening tension in Colombian-Russian relations in order to harm them contradicts the fundamental interests of our two peoples united by bonds of friendship and sympathy for many years. It should also be noted that this short-sighted line also directly affects the interests of some thousands of young Colombians who are currently studying in Russia, even within the framework of the government program in force for many years of providing free scholarships for foreigners. The economic-commercial relations do not come out winning either. Hopefully those responsible for making political decisions in Colombia do not choose to destroy what has been built for decades!

Our diplomatic mission, acting in good faith, does not tire of repeating that, contrary to malicious inventions, Russia has not intervened, nor does it intend to intervene in the political processes of Colombia. Our position as a member of the UNU Security Council regarding the implementation process of the Peace Accords in Colombia is based on principles and lacks political interests. I want to quote the words of Ambassador Vasiliy Nebenzya addressed to the Colombian delegation on April 12 in New York – “in Russia we usually tell our friends the truth”. Unfortunately, almost all the Colombian media omitted that key phrase. Note also that experts and the press in Colombia did not object to the setbacks and shortcomings in the peace process exposed by my colleague at the UNU.

Regarding Russia’s special military operation (OME) in Ukraine, the following should be emphasized. The current situation in Europe is the result of an acute security crisis on this continent stemming from the desire of various European and non-European countries to guarantee their security at the expense of others. It is also a result of OTAN’s policy which in its continuous expansion shows an indifferent and contemptuous attitude towards absolutely legitimate interests and demands of Moscow. For many years in the territories adjacent to Russia an “anti-Russia” has been created, pumped with the most modern weaponry, where Ukrainian neo-Nazi groups are used as the main battering ram in anti-Russian policy. For several states of the so-called “Collective West” it is simply Russia’s containment policy. But for us it is a matter of national security, of our future.

Here many journalists turn a blind eye to the fact that the conflict in the south-east of Ukraine, in Donbas, began in 2014, as a result of the unconstitutional coup in kyiv. They must be reminded that for eight years, eight years of humiliation and daily shelling of the population of Donbas, Russia was doing everything possible to resolve the situation by peaceful means. All in vain because of the uncompromising position of the Ukrainian authorities. The tragedy of this region remained invisible behind the media curtain of silence that the West consciously lowered. That is why we are forced, responding to the legitimate request of the Donetsk and Lugansk People’s Republics, to defend the people who live there.

Here at the Embassy we, like everyone else, hope that this difficult situation, which costs human lives, will end as soon as possible through an agreement between the parties to the conflict.